This meme, using a photograph of Jewish shoes piled up in the “luggage room” at the Auschwitz II–Birkenau concentration/extermination camp (museum), employs a particularly despicable argument against gun control, sometimes known by its portmanteau term: Reductio ad Hitlerum. It is an argument claiming that victims of the Holocaust could have resisted oppression under the Third Reich had they been armed (or better armed). Not only is the argument used to bolster the totally counterfactual “security against tyranny” argument for the Second Amendment to the U.S. Constitution (more on that later), but it employs the fallacy of post hoc ergo propter hoc—meaning that, first there were no privately-owned guns, therefore the Nazis won—and, finally, the sleazy “slippery slope” fallacy. 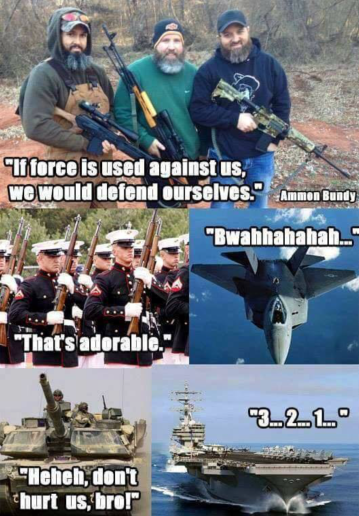 The thought of an unorganized mob of Americans with small arms prevailing against a government with a well-armed, well-disciplined military force, is too absurd to observe. Yet, Rasmussen Reports asked a sample of Americans, “Is the purpose of the Second Amendment to ensure that people are able to protect themselves from tyranny?” and, in January 2013, 65% of Americans agreed!

We believe this result rests on a popular misunderstanding of the relationship between government and citizenry: as “Outside the Beltway” writes, “it assumes that ‘the people’ are on one side even now and ‘the government’ is on the other, without understanding that the government derives from people and is not some foreign entity outside of the rest of us.”

Militias intent on wearing down a tyrannical government do not (except in fantasy) evolve into defenders of a free and democratic state. Says The Economist, “Freedom is the product of orderly democratic governance and the rule of law. Popular militias are overwhelming likely to foster not democracy or the rule of law, but warlordism, tribalism and civil war. … Name your authoritarian takeover: Germany, Japan, Russia, China, Egypt, Libya, Brazil, Greece, Spain, Indonesia, the Philippines, Iran, Chile, Argentina, Czechoslovakia, Syria—popular militias never resist authoritarian takeover and preserve democracy or civil freedoms. That is a thing that happens in silly movies. It is not a thing that happens in the world.”

We argue that the “well-regulated militia, being necessary to the security of a free State” part of the Second Amendment, which “security against tyranny” advocates consistently ignore, is an essential qualifier. As The Atlantic writes, “A citizen uprising at any point in the foreseeable future would probably not involve like-minded constitutionalists taking up arms to defend democracy and liberty. It would more likely be a matter of one aggrieved social group attacking another. And for the most criminal and vicious members of society, the rationale of ‘protecting’ their own rights would be a convenient justification for straight-up looting, robbery, and bloodshed. …

“Even individual Americans armed with military-style assault rifles could hardly pose any serious resistance to any future tyrannical central government supported by overwhelmingly powerful military capabilities. … War, particularly civil war, is by its nature violent. Official state armies are not immune from the tendency to inflict unjustified violence on civilians. But in America today, this prospect is far more remote, and far less terrifying, than the notion of armed citizens striking out against a perceived enemy, answering to no authority other than their own individual prejudices and passions.”

Far from defending freedom, in the words of legal scholar Roscoe Pound, writing in 1957, “A legal right of the citizen to wage war on the government is something that cannot be admitted. … In the urban industrial society of today a general right to bear efficient arms so as to be enabled to resist oppression by the government would mean that gangs could exercise an extra-legal rule which would defeat the whole Bill of Rights.” (emphasis added)

This turns history on its head, rewriting it to suit an agenda. To say (in the most egregious example) an armed Jewish populace (a tiny minority of the German population) could have resisted Hitler, who was supported by the non-Jewish citizenry—partly due to government propaganda, which validated a pre-existing virus of popular anti-Semitism—is darkly amusing. Yet gun rights advocates persist in their rewriting of history to proclaim that an armed Chinese citizenry could have prevented the 1989 Tiananmen Square massacre!

If history, as opposed to Red Dawn movie fantasy, is any guide, “there is scant empirical evidence that firearms proliferation and the maintenance of democratic institutions are positively related; instead, institutions to protect human rights, fundamental freedoms and the rule of law and also socioeconomic rights have been proven to be far more important factors in preventing military coups or other threats to democracy.” In other words, we need to protect our democratic institutions, not shoot them down.

As for the slippery slope argument, this claims that even one sensible reform of unregulated gun ownership inevitably leads to wholesale gun confiscation. In answer, we simply note that other nations with similar democratic traditions have enacted even stricter regulation of gun ownership than is even contemplated in the USA: are Japan, Australia, Britain, France and a dozen other countries—even (post-Nazi) Germany—really less free that we are? Is the USA so wise that from their example we cannot deign to learn?

PS: The kids did not walk out of school “to protest guns”; they walked out of school to protest the easy availability of rapid-fire guns in the hands of people capable of killing 17 students and teachers in seven minutes.

PPS: The “security against tyranny” argument is evergreen. But it was used again in this tweet:

The answer (not my own) was to the point: “Japanese concentration camps. The Trail of Tears. Slavery and slave catchers. Private prisons. You literally forgot all of American history. What you meant to say is you don’t remember when white people were put in camps. Check your racism.”