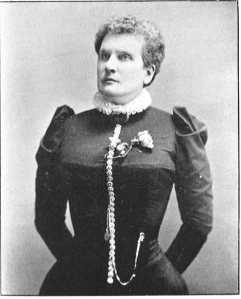 It was on this date, March 18, 1840, that Marilla Marks Ricker was born Marilla Young in New Durham, NH. She was the daughter of a “mixed” marriage: a Freethinker father and a devout Free-Will Baptist mother. For 50 years of her life Marilla, as she liked to be called, maintained that if she paid her taxes she was entitled to vote. She had written in a 1909 letter that, “so long as women are hanged under the laws they should have a voice in making them.” “No woman was ever known to escape a criminal statute because its language ignored her sex…. Shall the word ‘he’ include woman in one set of laws and exclude her in another?”[1]

As a child of 10, Marilla attended a Baptist sermon at her mother’s church. After that experience, she swore she would never go to church again, later writing, “Do you wonder that I, a child of ten years, said to my father, who was a freethinker, infidel, atheist or whatever else you please to call him, ‘I hate my mother’s church’?”[2] Marilla refused to pray at home and, when she became a schoolteacher at age 16, refused to lead her students in Bible readings, as was the custom. When pressed to do so, anyway, rather than indoctrinate her students, she left teaching behind. Later, in her books, she candidly gave her views on religion, writing,

The greatest danger which confronts our nation today is not political but religious, and the preservation of our free institutions does not depend upon our army and navy, but upon the emancipation of the human mind from ecclesiastical slavery. … You cannot have free schools, free speech and a free press where the mind is not free.[3]

In 1863, she married John Ricker, a successful real estate speculator, but Ricker died within five years, leaving Marilla a wealthy widow. It is possible her husband was a freethinker, as well, for Marilla later wrote,

Give me then the man who is not a Christian, and who has no religion, for if the man who loves his wife and children, who gives to them the strength of his arm, the thought of his brain, the warmth of his head, has not religion, the world is better off without it, for these are the highest and holiest things which man can do.[4]

During the American Civil War, she attempted to offer her services as a nurse for the Union Army, but was turned down as untrained in nursing. She used her time and money instead to aid the war effort. She traveled to Europe from 1872-1876, learned to speak fluent German and “became conversant with the outside doings of the Roman Catholic Church.”[5] On returning home, Marilla studied law and in 1890 became the first woman admitted to the New Hampshire bar and one of the first practicing female lawyers in the U.S. A formidable-looking woman, while living for a time in Washington, DC, Marilla acquired the reputation as “the prisoners’ friend” by arguing for the rights of prisoners. As a member of the National Woman Suffrage Association, an organization created by Susan B. Anthony and Elizabeth Cady Stanton, she fought for women’s rights, and attempted to flout the law by voting. Aspiring to bring public shame to the shutting out of women from high office, in 1897 Marilla applied to become ambassador to Colombia and in 1910 attempted to run for governor of New Hampshire. “Whether I secure the appointment or not,” she said of her ambassadorship application, “I have established a precedent in asking for it,” justifying her provocative moves by saying, “there is no gender in brain, and it is time to do away with the silly notion that there is.”[6] Elsewhere, she said of sexual inequality, “Let come what will come, no man, be he priest, minister or judge, shall sit upon the throne of my mind, and decide for me what is right, true, or good.”[7]

Marilla was an enthusiastic Freethinker, believing it is chiefly the patriarchal religions that keep women from becoming first-class members of society. She was strongly influenced by Thomas Paine and Robert Ingersoll. Indeed, she worked alongside Ingersoll on the Star Routes trials of 1882-1883. Several Freethought books she wrote include The Four Gospels (1911), I Don’t Know, Do You? (1915), and I Am Not Afraid, Are You? (1917). Writes Annie Laurie Gaylor, co-president of the Freedom From Religion Foundation, “[T]he women’s movement has not acknowledged the debt it owes to the unorthodox, freethinking women in its ranks. Their non-religious views often have been suppressed, as if shameful, when in fact repudiation of patriarchal religion is an essential step in freeing women.” Gaylor goes on, “the status of women and the history of the women’s rights movement cannot be understood except in the context of women’s fight to be free from religion … if there was one cause which had a logical and consistent affinity with freethought, it was feminism.”[8] As Marilla herself put it, in I Am Not Afraid, Are You?, “I am a freethought missionary, and I am doing my level best to drive superstition, alias Christianity, from the minds of mankind.”

“On the question of personal immortality,” wrote a contemporary in September 1905,

Marilla has decided opinions… Marilla puts the argument this way: The belief in ever-lasting life was first evolved by savages, and then taken up by priests who promised an endless life of joy to all who obeyed their edicts. It is a most selfish and harmful doctrine, and by turning man’s attention from this world to another, has blocked progress at least a thousand years.[9]

Marilla died of a stroke at he age of 80 on 12 November 1920. Often saying, “A steeple is no more to be excluded from taxation than a smoke stack,” it was Marilla Marks Ricker who once said, “Nothing grows slower than truth, and nothing faster than superstition.” She had attempted to register and vote in every election, and was finally able to do so—legally—just months before her death.