Peace of Westphalia (1648)
Religion and the Thirty Years War

It was on this date, October 24, 1648, that the Holy Roman Emperor, the French, the Spanish, the Dutch, the Swiss, the Swedes, the Portuguese and representatives of the Pope signed the Treaty of Westphalia, calling for “a Christian and Universal Peace,” thus ending the Thirty Years War. That this was a classic example of a war caused by and fought over Christianity is undisputed by any but the most hardened Christian apologist. It is proof positive of the words of Jesus in Matthew 10:34.

“Think not that I am come to send peace on earth: I came not to send peace, but a sword.”
— Matthew 10:34, quoting Jesus 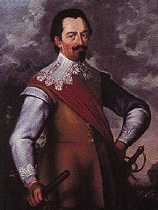 [The Thirty Years War] was primarily a religious war and was waged with the bitterness characteristic of such wars, but at the same time political and feudal quarrels were interwoven with the religious question … based on the principle cujus regio ejus religio [Latin: Whose rule, his religion]….[1]

Begun in 1618 with Catholics and Protestants fighting over claims in Bohemia, and fought mostly in the realm of the Holy Roman Empire, the Thirty Years War nevertheless expanded to include the Baltic and raged from the frontiers of France to regions in Russia. The effect on the social, political and economic structure of Europe was summed up by the Encyclopedia Americana: “… few wars have been more calamitous in their general effect on the mass of the people, and the happiness and progress of mankind.”[2] And the Cambridge Modern History says the conflict furnished “the most appalling demonstration of the consequences of war to be found in history.”[3]

Signing the Treaty of Westphalia: The oathtaking of the Peace of Westphalia (detail from a painting by Gerard Terborch, 1681)

Because their propaganda and limited killings of Protestants had failed, the papal treasury had stored vast sums of money for the express purpose of annihilating the apostates. Furthermore, the papal storm troopers, that is, the Jesuits, were convinced that only violence could harness the heresy, and they so advised their royal patrons. Indeed, the major players of the Thirty Years War – Duke Maximilian of Bavaria (1573-1651), Emperors Ferdinand II (1578-1673) and the young Ferdinand III (1608-1657), and the generals Albrecht von Wallenstein (1583-1634) and Johan Tzerclaes, Count of Tilly (1559-1632) – were pliable pupils of the Jesuits (and this was the time of Cardinal Richelieu).

The war was promoted as a “final solution” to the Protestant problem in Europe and the treasure stored in SantAngelo was mean to finance it. But the pope who saw the end of the war, Urban VIII (Galileo’s tormentor), who had already alienated the Catholic side by secretly siding with the Protestants in France, was ladling generous helpings of that treasure into the pockets of his worthless relatives!

In a generation of fighting, some sixty percent (10,000,000 out of 16,000,000) of the people of the German/Roman Empire were slain; in some provinces as many as 90% were killed – not just to warfare but to famine and disease – while 80% of the villages in Bohemia were destroyed. Accompanying the bloodshed was a moral decay unusual even for Christendom: armies of women stripped from their homes followed the soldiers and traded sex for food. Rape of German women occurred on a massive scale, so that it is hard to believe the Nazi notion of a “pure German” heritage. And the economic dislocation in central Europe resulting from the sectarian strife made labor scarce and seriously stalled reconstruction. If there any good to come out of the Peace of Westphalia, and the end of the Thirty Years War, it was a definition of just what a modern nation-state is, and where its citizens’ loyalty lies. In theory, if not in practice, that loyalty turned to state rather than to church.

[1] The full quote reads: “It was primarily a religious war and was waged with the bitterness characteristic of such wars, but at the same time political and feudal quarrels were interwoven with the religious question, with the consequence that the armies, considering themselves as their masters’ retainers rather than champions of a cause, plundered and burned everywhere, military violence being in no way restrained by expediency. In a war based on the principle cujus regio ejus religio it was vain to expect either the professional or the national type of army to display its virtues.” Charles Francis Atkisson, Encyclopedia Britannica, 11th edition, Vol 26, p. 852.
[2] Encyclopedia Americana (“which is saturated with Catholic influence,” says historian and ex-priest Joseph McCabe, who consulted an edition prior to 1948).
[3] Cambridge Modern History, Cambridge, Eng.: Macmillan, 1934.