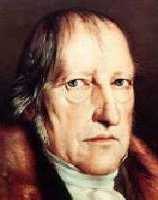 It was on this date, August 27, 1770, that the great the German philosopher Georg Wilhelm Friedrich Hegel was born in Stuttgart. After studying theology at the University of Tübingen, he tutored at Bern and Frankfurt, then lectured at the University of Jena (1801-06), before becoming headmaster of a Nuremberg school (1808-16), and professor at Heidelberg (1816-18) and Berlin (1818-31).

Hegel’s most important writings are Phenomenology of Mind (Phänomenologie des Geistes, 1807), The Science of Logic (Wissenschaft der Logik, 1816), an Encyclopedia of the Philosophical Sciences (1817), The Philosophy of Right (1821). The one thing that exists, Hegel said in his Science of Logic, is Spirit or the Absolute Mind, which is in a state of eternal development: an unfolding of reality in terms of thesis — antithesis — synthesis. While working out a rebuttal of epistemology, Hegel posited a development of consciousness from individual sensation through social concern with ethics and politics to the pure consciousness of the World-Spirit (Welt-Geist) in art, religion, and philosophy. This comprehensive world-view, with its stress on spirit, misdirected European thought for a century.

However, as to God, “The proofs,” said Hegel, “are to such an extent fallen into discredit that they pass for something antiquated, belonging to days gone by.” Hegel professed to be a Christian in his personal morality, but he despised theology and rejected the idea of a personal god. Second perhaps only to Immanuel Kant among German philosophers, Hegel doubted immortality, so that when he was reminded of Kant’s moral argument for a future life he said, “So you expect a tip for nursing your sick mother and for not poisoning your brother?”