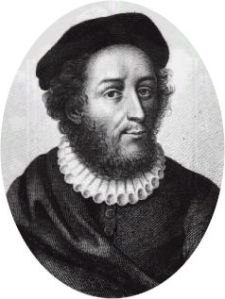 It was on this date, July 25, 1368, that the foremost surgeon of medieval Europe, Guy de Chauliac, died in Avignon, during the exile of the Papacy in that French city on the Rhône. His date of birth, in Auvergne, is unknown, but it was perhaps sometime in the year 1300. He studied medicine in Toulouse, Montpellier, and Bologna, where he learned to eliminate astrology and mysticism from surgery. He wrote the Chirurgia magna, which was a standard surgical text for three centuries, and he was the most celebrated surgeon in the 14th century. At Avignon Chauliac was physician to Popes Clement VI, Innocent VI and Urban V.

The underpinning of surgery is, of course, a knowledge of human anatomy. Yet it is this study that the Christian Churches stopped dead in its tracks for a thousand years – until the 16th century. Christianity, of course, absorbed the worst ideas from paganism, such as the Ancient Egyptian and Greco-Roman aversion to dissection of cadavers, and incorporated them into a theology endorsed by Tertullian (who denounced the anatomist Herophilus as a butcher) and St. Augustine. The Apostles Creed promised the “resurrection of the body,” which made dissection perilous to personal immortality.

The medieval argument against anatomical study, that “the Church abhors the shedding of blood,” would be laughable if the Churches themselves had not spilled oceans of blood from the bodies of other Christians to enforce orthodoxy. Monks were forbidden to undertake surgery by the Council of Le Mans in 1248. But it was Pope Boniface VIII – Dante, a contemporary, consigns Boniface to the depths of hell – who issued the bull forbidding the practice of removing the flesh from the bones of Crusaders who had died in the East. Technically limited as it was, the bull was universally interpreted as a general prohibition of dissection. As A.D. White says,

…thereby surgery and medicine were crippled for more than two centuries; it was the worst blow they ever received, for it impressed upon the mind of the Church the belief that all dissection is sacrilege, and led to ecclesiastical mandates withdrawing from the healing art the most thoughtful and cultivated men of the Middle Ages and giving up surgery to the lowest class of nomadic charlatans.*

This view is ratified over 500 years later by British physician Sir Thomas Clifford Allbutt, who says that during the Middle Ages surgery was “hated and avoided by medical practitioners, scorned in clerical and feudal circles,” and the opposition to it “culminated in the reactionary ferocity of the Church.”** Allbutt goes on to say that medical progress in the sixteenth and seventeenth centuries was due to “the ascendancy of secular elements.”

However, 16th century Flemish anatomist Andreas Vesalius, who is claimed by the Catholic Encyclopedia, was in fact cruelly persecuted by the Church, and eventually driven to his death by the Inquisition, chiefly because he practiced human dissection. Vesalius was physician to Charles V of Spain, to whom he dedicated his greatest work, De Corporis Humani Fabrica (Of the Fabric of the Human Body). But it hardly exonerates the Churches to say that selected physicians were allowed to comfort the comfortable when the masses were afflicted at the hands of fly-by-night barber-surgeons. Vesalius lived one step ahead of the Inquisitors, especially when his dissections failed to find the “resurrection bone.” When Philip II finally exonerated him, it was on condition that he pilgrimage to Jerusalem – a journey that taxed the 50-year-old anatomist to death.