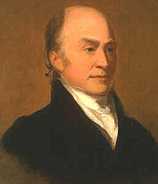 It was on this date July 11, 1797, that the 6th President of the United States, John Quincy Adams, was born in Braintree (now Quincy), Massachusetts. The oldest son of John Adams, John Quincy became a lawyer and diplomat before embarking on his relatively uneventful, one-term presidency, from 1825 to 1829.

A Unitarian like his father, which at the time was popularly judged next akin to Atheism, Adams at age 21 was critical of those with loud, bigoted religious passions. In his Life in a New England Town, Adams wrote, in contrast,

I am fully determined never to puzzle myself in the mazes of religious discussion, to content myself with practising the dictates of God and reason so far as I can judge for myself, and resign myself into the arms of a being whose tender mercies are all over his works.

The election of a Unitarian chaplain to Congress, which was “followed by unusual symptoms of intolerance,” aroused Adams’ disapproval. Yet he served with more distinction in that body, from 1830 to 1848, than as president. In his diary for 21 January 1844, Adams wrote:

The question about keeping the Sabbath holy as a day of rest is one of the numerous religious and political excitements which keep the free people of this Union in perpetual agitation. They seem to be generated by the condition of the country – in a state of profound peace. There are in this country, as in all others, a certain proportion of restless and turbulent spirits – poor, unoccupied, ambitious – who must always have something to quarrel about with their neighbors. These people are the authors of religious revivals.

John Quincy Adams (played by Anthony Hopkins) was the protagonist in the 1997 Steven Spielberg film Amistad, about an 1839 revolt by 53 West Africans on a slave ship of that name, whom Adams defended in a coda to a distinguished career after his presidency. Adams died in office on 23 February 1848. His funeral was held in a Unitarian church.